The workshop allows the identification of groups, affiliations, and the content of works that make up the group.

The concept of Group in Sage makes it possible to treat the contents of several works in the same way. It is through groups that we carry out analyzes, exports, attachment to contracts, etc. This concept is therefore essential.

A group is a collection of works that have at least one characteristic in common: from the same import, have the same actor, must be subject to a common action … The number of groups used is unlimited. It is important to give them a clear name.

A single work can be part of several groups: caution: do not attach conflicting information. E.g.: different contracts for royalty payments that would contradict each other.

Groups can also be temporary. Periodically, to carry out an action without keeping a trace, simply check temporary, so when you close the window the action is deleted. On closing, a pop-up message will ask you whether you wish to delete or make the group permanent.

** A group is therefore a grouping of works, permanent or temporary, allowing you to do various actions. **

These groups can be established in : the list of imports, the list of works via the advanced search, the catalogue fixing workshop by comparing two different groups or by selecting a few works in « works of the group ».

Groups of works have become, over time, a central element of the software. They are used for analyses, verifications and to make payments.

A group is ** static ** if it is created manually or if it is created automatically by Le Sage during an import. After its creation, you, alone, have control of the additions and deletion of works within.

By contrast, a group is ** dynamic ** if it is able to evolve (almost) on its own and therefore works are added or removed automatically. A group is dynamic when a condition is attached to it. For example, the condition can be the presence of a rightholder within the work. Imagine that we want to create a group containing all the works of an author. Open the list of actors, click right on the author and, in the menu Create a work group : Create a work group 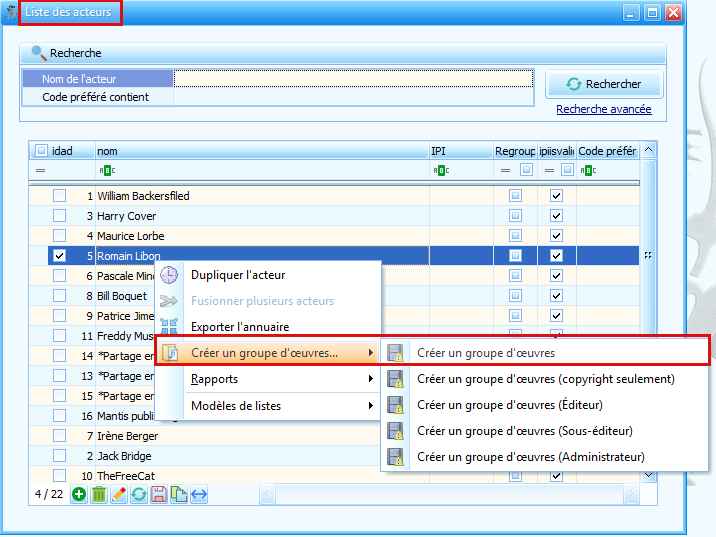 The group thus created will be dynamic and will be conditioned by the presence of this author in the works. If we now import a catalogue of SACEM and it contains new works in which this author is present, the new works will integrate the dynamic group. Sage does not automatically decide to update dynamic groups: you must click on the button rebuild all dynamic groups in the group list:

There are different conditions for forming dynamic groups:

The first column indicates the group number. This number is automatically assigned by The Sage and is unchangeable. Normally, it is of no use to you directly.

Next to it, is the name of the group. The name can be changed at any time.

Then follows the type of group: essentially informative, it is used to distinguish the uses of the groups. « Import », « Film » and « Export » types are defined by The Sage, however you can change them at your convenience. ** Deposit ** is a special type: it is used to make deposits electronically. Only ** Deposit ** groups can be chosen in the HRF2 exports.

The next column indicates the contract attached to the group.

The column « Dyn » indicates if a group is « Dynamic »: the works attached to it are able to evolve automatically.

The next column shows the number of works currently attached to the group.

The Tags enable the creation of groups of groups. More on that matter in Tags 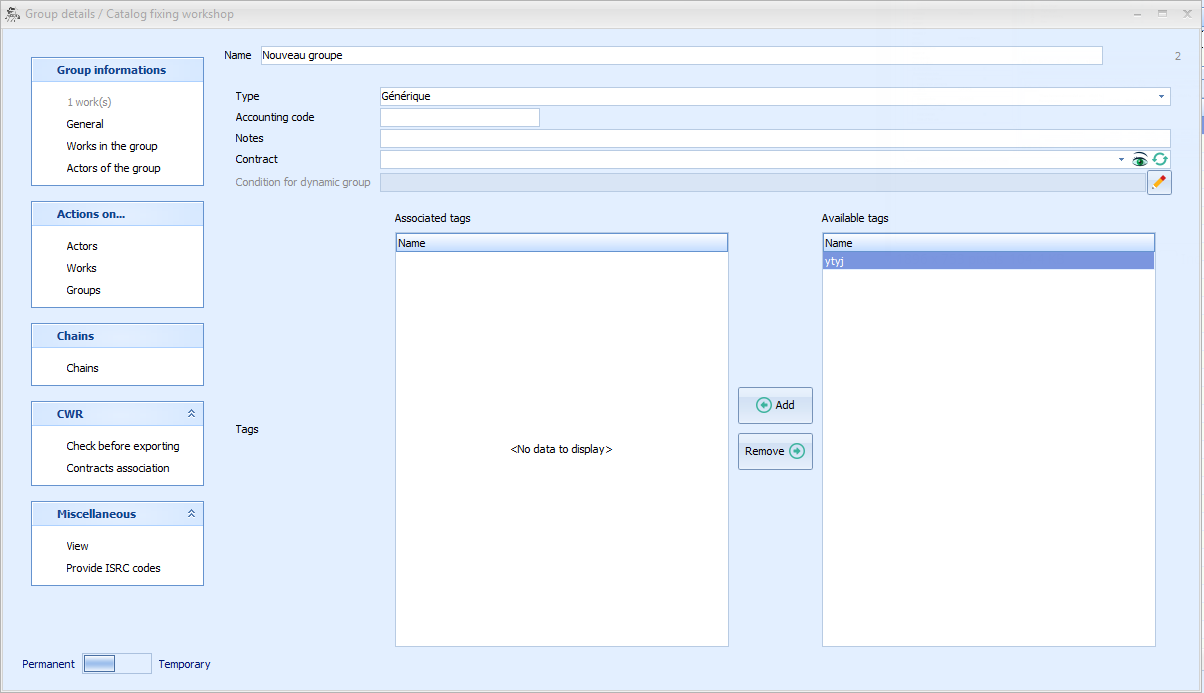 Group name: name identifying the group Group Type: group category. Accounting code: ?? Notes: personal note about the group. Contract: selection of a contract among those defined in the list of contracts. Information on royalties will therefore be reflected in each worksheet. Condition: the conditions make it possible to generate dynamic groups of works having a condition in common e.g. an actor, a film, a third party, a tag, etc…

Depending on the use of the group all this information is not to be entered. 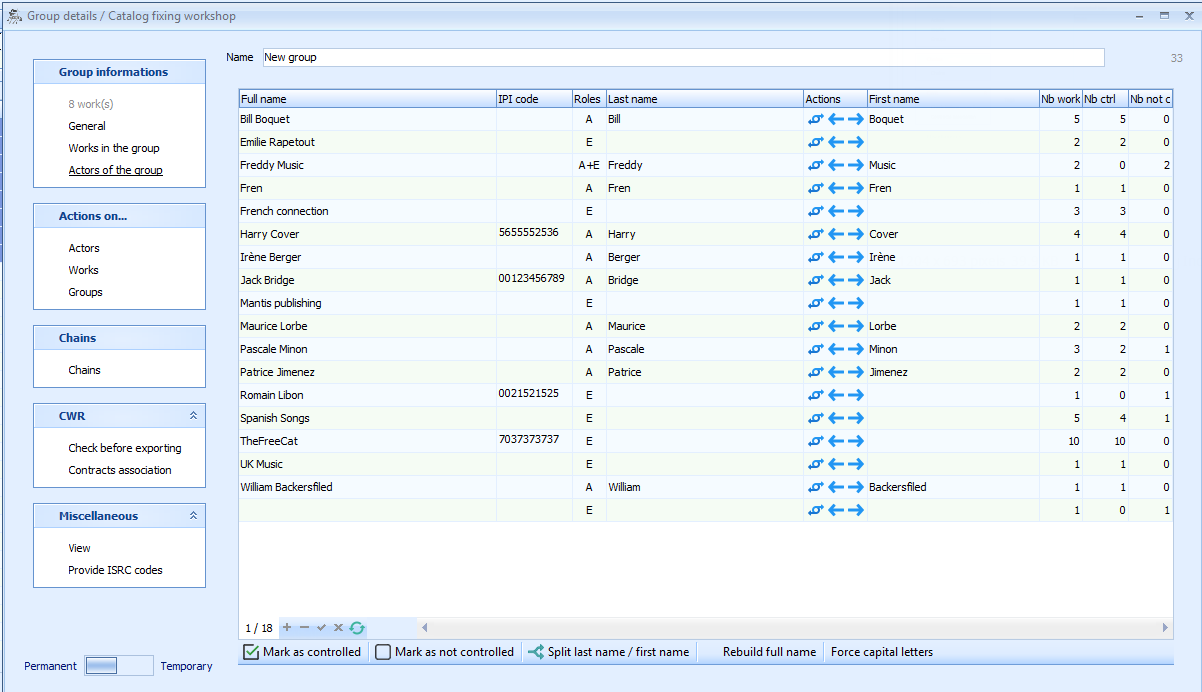 These are the actors present in the works that make up the group. For each actor:

These group actions make it possible to treat works collectively.

You have to be very careful about actions because you cannot undo them, or at least no history of changes is available. The data present in the worksheets and in the actors” sheet are also modified. 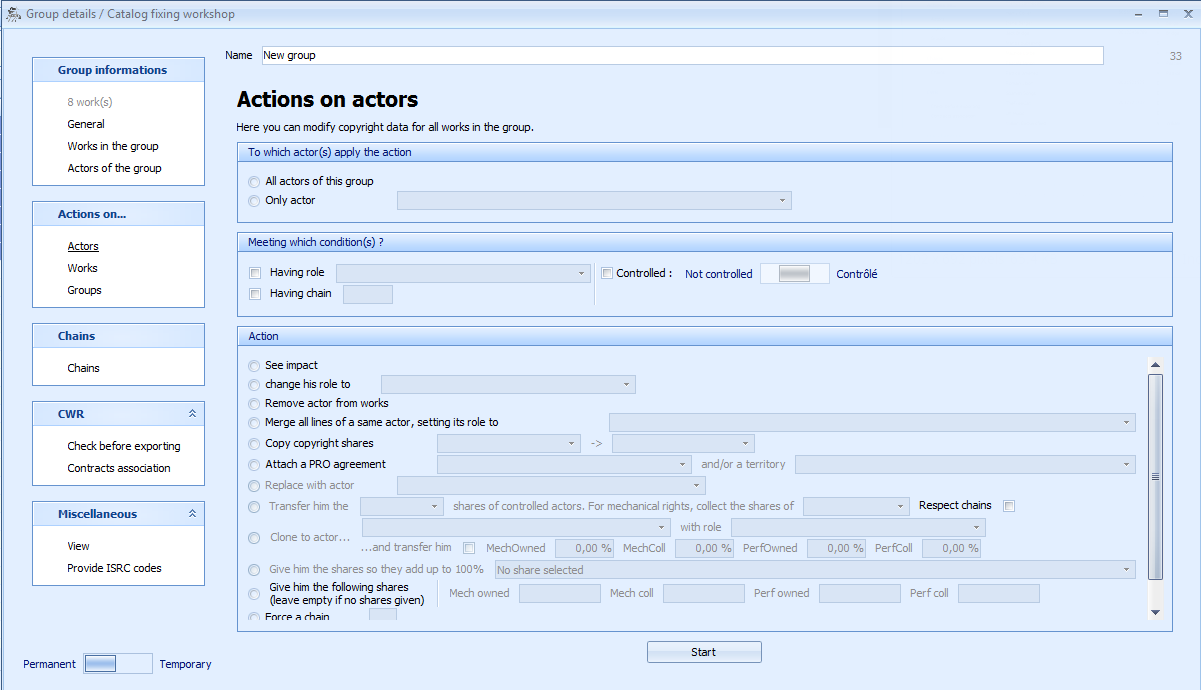 This workshop allows intervention on the copyrights in all the works of the group. 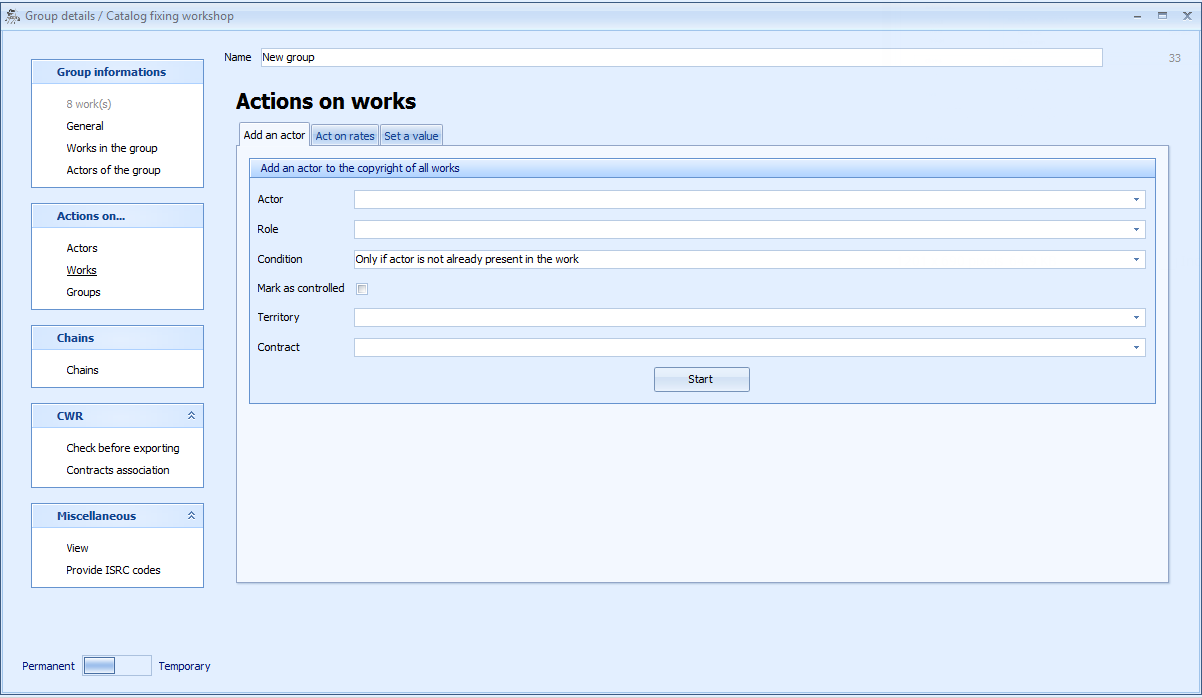 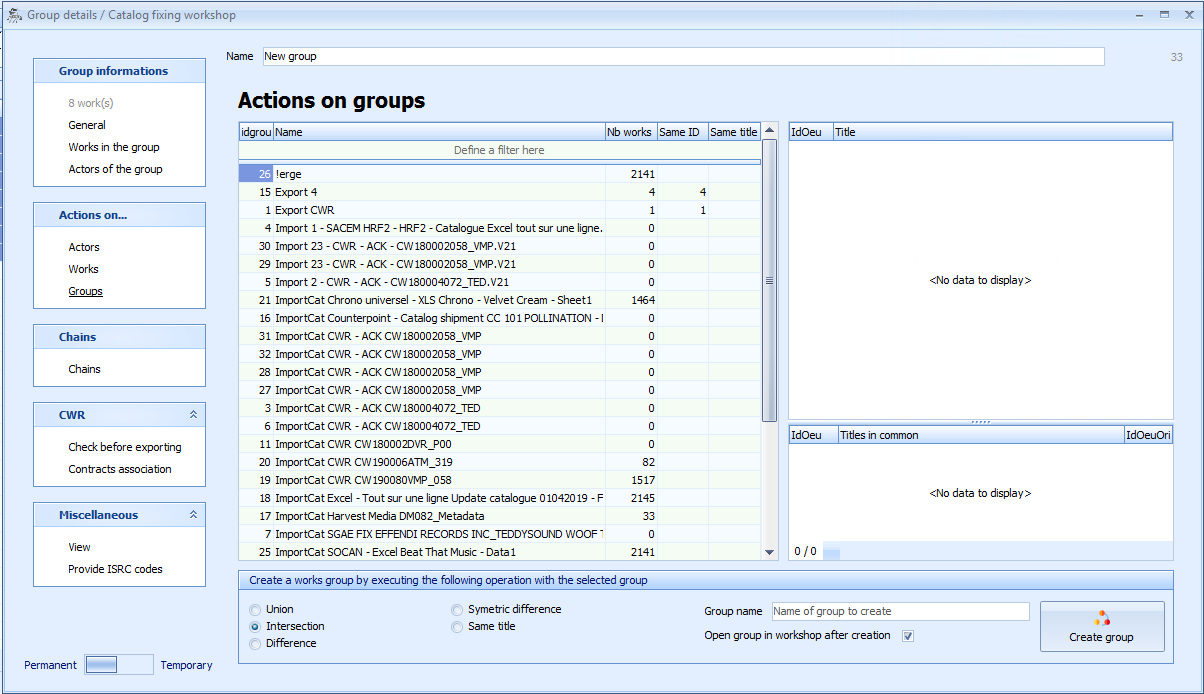 This window is dedicated to make groups of works interact.

For each action a third group is created. It can be named via « Group Name » and opens automatically after creation by not unchecking « open the group in the workshop after creation ». 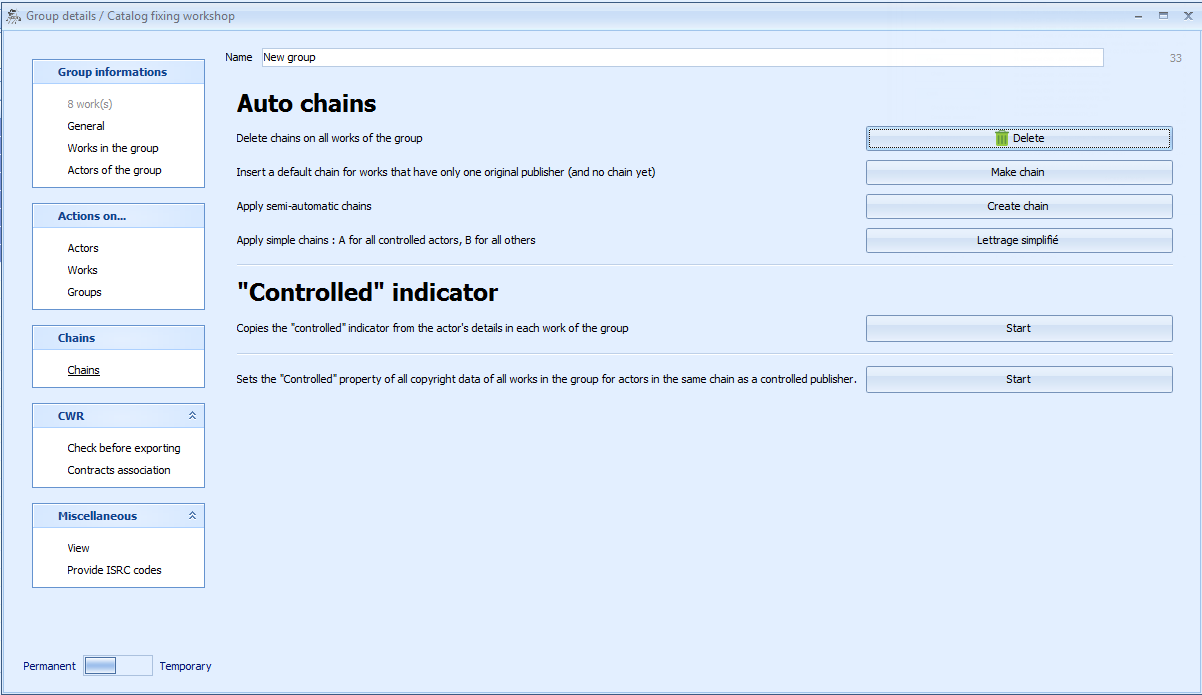 Lettering (the chains of rights), can be managed by group and in an intelligent way by Sage.

Two modules are available in the workshop to check and rework your works before export: